Three Great Mysteries In One Package!

Terrence Bailey awakes one night to find his mother-in-law standing in a corner of his bedroom. The only problem is that his mother-in-law has been dead for seven years. Several weeks later Terrence dies of a heart attack . . . or does he? Josiah’s nose starts twitching in a bad way when Terrence goes to the “Great Beyond” and she thinks his death has something to do with Jean Louis, an internationally known portrait artist who has come to the Bluegrass to paint Lady Elsmere’s portrait. She just doesn’t like Jean Louis and does some digging on him. What she finds will involve Detective Goetz and almost get her daughter, Asa, shot. Again, Josiah blames the black earth of Kentucky for spitting back secrets that should have remained buried in the dark and bloody ground.

Charlie Hoskins was a self-made man. Born poor as a church mouse, he was relentless in his pursuit of money to the point of being universally hated. Oh, he was admired for his rags-to-riches story. He was admired for being a good businessman. But Charlie never learned tact and made many enemies in the process of realizing his goals. He didn’t care that in order to accomplish his dreams, he trampled on those of others. So it didn’t surprise Josiah Reynolds when someone decided to kill Charlie. The only thing that bothered her was that her lawyer and friend, Shaneika Mary Todd, might have done the dirty deed! Join Josiah as she discovers the truth in a world that hides its secrets among antebellum mansions and million dollar horses grazing in emerald pastures.
This is the world of the Bluegrass . . . a world of wealth, privilege, and now murder!

Josiah Reynolds could hardly believe she heard someone call out her name as she strolled down 75th Street in New York City. With the promise of a free drink, Bunny Witt, of the Philadelphia Witts, steered Josiah into nearby Bemelmans Bar where she proceeded to unfold a tale about being stalked by a mysterious stranger. It seems that Bunny’s apartments in London, New York, and Lexington, Kentucky have been broken into and carefully searched, yet nothing seems to have been taken. Bunny claims she has no idea what this mystery person could want from her. However, she is desperate for someone to help her find out who is tormenting her and why. She has decided that someone should be our Josiah! This chance encounter in the Big Apple leads Josiah into the world of haute couture, mysterious princes from India, precious gems, and . . . murder! 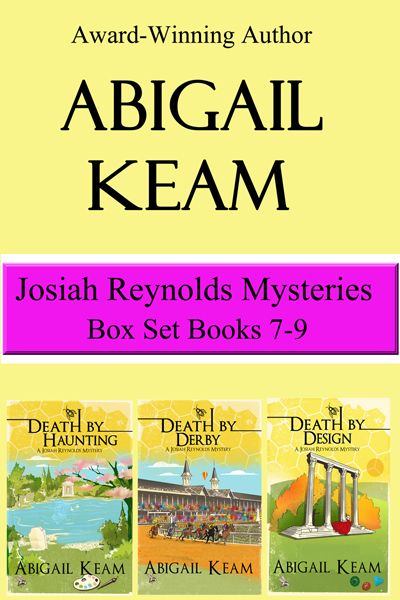