Death By A HoneyBee
Josiah Reynolds is a beekeeper trying to stay afloat by selling honey at the Farmers’ Market. Her world is turned upside down when a body is found in her beeyard. Alas, the victim is her nemesis.
Police call the death murder with Josiah the prime suspect! Fighting an unknown enemy in the world of Thoroughbreds, oak-cured bourbon, and antebellum mansions, Josiah struggles to uncover the truth in a land that keeps its secrets well.

Death By Drowning
As she recovers from serious injuries after her fall down a cliff with O’nan, Josiah is again sleuthing. Her friend, Irene Meckler, asks Josiah to investigate the death of her nephew which was ruled accidental. Irene has her doubts.
Will Josiah discover the real reason for the death of her friend’s nephew? As Josiah fights to recover, she seeks the truth regarding a youth and the secret of how he died. Josiah searches in a land that doesn’t let go of its past easily. The past never dies in Kentucky – the dark and bloody ground.

Death By Bridle
Josiah is back on the trail of murder. Arthur Aaron Greene is one of Kentucky’s most prominent horsemen but is found hanging from horse barn rafters with stones in his pockets and a bucket of water under his feet. The only witness is a nine year old boy who can’t remember what happened. Relentless in her pursuit of the killer, Josiah stumbles into decades of lies and deceit that include her dear friend, Lady Elsmere.
Josiah must go back to 1962 if she is to find the truth, while making the rounds of quirky characters found only in the Bluegrass. Josiah struggles to uncover truth in a land that keeps its secrets well.

Death By Bourbon
Life takes a dramatic turn for Josiah when she witnesses a death at a party for Matt, her best friend. Socialite Addison DeWitt falls into a fit after taking a sip of bourbon. That would be upsetting enough, but Josiah is sure it is murder. However, no one will believe her except for Lady Elsmere and mystery writer Meriah Caldwell. The three conspire to bring the murderer to justice.
The suspect is always three steps ahead of them. Worse still, Josiah’s daughter, Asa moves to London, Franklin leaves town, and Jake starts singing a different tune. Josiah doubts her ability to meet the future alone. Maybe it’s time to sell the Butterfly and move to Florida. But Josiah knows there is justice and then there is Kentucky justice.

Death By Lotto
Ethel Bradley thinks someone is trying to kill her, but doesn’t know who or why. She enlists the help of her childhood friend, Lady Elsmere who has troubles of her own in the form of a ne’er-do-well English nephew who’s trying to steal her estate. Both women turn to Josiah.
Josiah calls Detective Goetz who recommends a shamus named Walter Neff. Walter and Josiah scour the Bluegrass for answers that turn out to be deadly. What’s worse, Fred O’Nan (a rogue cop who tried to kill Josiah) is free and gunning for her. Josiah, full of sass and vinegar, meets these challenges head on with the support of her friends, Franklin and Matt.
Will Josiah be thwarted this time?

Death By Chocolate
Ginny Wheelwright begs Josiah to solve the disappearance of her son, Dwight. Josiah delves into Dwight’s world of white picket fences and tidy lawns and discovers that it hides dangerous secrets, leading Josiah to the edge of the beautiful Cumberland Falls. All the while, O’Nan, Josiah’s nemesis, plans his revenge on the woman he thinks ruined his life. This time he gets close. So close that someone is going to die.
Will Josiah survive the thundering waters of the Cumberland Falls, or will O’Nan push our brave Josiah over the Falls to meet her maker? One thing is sure, when Josiah and O’Nan clash at Cumberland Falls, one of them will die. As Josiah always says – there is justice and then there is Kentucky justice. 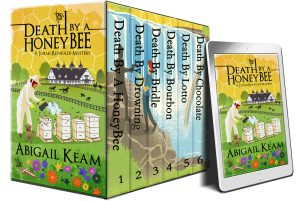