Death By Deceit
Josiah Reynolds and her girlfriend had just seen a movie and were going home when they discover a dead body. Why does this always happen to Josiah?

She learns the dead man was a reporter and a stranger to the Bluegrass. The police believe his death is due to a botched robbery, but Josiah thinks otherwise and begins snooping around. When Detective Drake tells Josiah to back off, Josiah’s forensic psychiatrist boyfriend, Hunter, comes to the rescue and hires her to help investigate the case. Now Josiah has carte blanche to all the reports concerning the case, and they bear out her theory of what really happened to the dead reporter, but no one will listen.

Death By Magic
Josiah goes to a fundraiser for abandoned Thoroughbred horses and meets Rudy Lee; whereupon, he tells her a fortune teller at the event prophesied he will be murdered. But while Josiah tells Rudy the fortune is utter nonsense, she can’t help shake the notion the fortune teller might be right. Join Josiah in her search for the truth in the “dark and bloody” ground of “Caintuck” where secrets are held tight to one’s heart and deep within the dark, loamy soil of its ancient hunting grounds.

Death By Shock
Josiah is joined by Shaneika, and her sweet, innocent cousin, Heather, on an archaeological dig at Fort Boonesborough where Daniel Boone led pioneers to the wild frontier of “Caintuck.” At Boonesborough Josiah and Shaneika meet the Dane twins, rich society women, who just rub them the wrong way. However, Heather is entranced by the sisters, having read about them in the society columns and financial pages. That is until Heather catches one of them plotting to murder her identical twin. But which twin is planning to murder the other?

Heather can’t tell them apart. She tells Josiah what she witnessed, hoping our intrepid sleuth will intervene. Josiah is unable to prevent the murder, but soon discovers Heather is neither sweet nor innocent and might have a motive for lying about the Dane sisters. As Josiah does some digging of her own, it turns out other participants on the excavation also have motives for murder. Josiah searches for truth in a land that hides its secrets well in soil soaked with the blood of innocents and scoundrels alike. Kentucky is not called the “dark and bloody ground” for nothing. 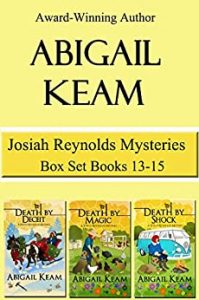