Death By Haunting
Terrence Bailey awakes to find his mother-in-law standing in a corner. However, his mother-in-law has been dead for seven years. Weeks later Terrence dies of a heart attack, or does he?
Josiah thinks his death is connected to a renowned portrait artist who’s in the Bluegrass to paint Lady Elsmere’s portrait.
Josiah noses around. What she finds will involve Detective Goetz and almost get her daughter, Asa, shot.
Josiah blames the black earth of Kentucky for spitting back secrets that remain buried in the dark & bloody ground.

Death By Derby
Self-made man Charlie Hoskins was born poor as a church mouse. He pursues money to the point of being universally hated. He’s admired for his rags-to-riches story, but has made many enemies in the process of realizing his goals.
So it didn’t surprise Josiah when someone killed Charlie. Unfortunately her lawyer and friend, Shaneika Mary Todd, might have done the dirty deed!
Join Josiah as she discovers the truth in a world of antebellum mansions and million dollar horses grazing in emerald pastures. The Bluegrass . . . a world of wealth, privilege, and now murder!

Death By Design
Josiah hears her name called out as she strolls down 75th St. in New York City. With the promise of a free drink, Bunny Witt steers Josiah into a nearby bar where she unfolds a tale of being stalked by a mysterious stranger.
Bunny’s apartments in London, New York, and Lexington have been broken into and searched, yet nothing was taken.
Bunny claims she has no idea what this mystery person could want. She is desperate for someone to help her. She has decided that someone should be our Josiah!
This chance encounter in the Big Apple leads Josiah into the world of haute couture, princes from India, precious gems, and . . . murder!

Death By Malice
Josiah Reynolds opens her door to find her neighbor, Sandy Sloan, clutching her little dog, Georgie. “Hi Josiah. Sorry to bother you. Can you keep my dog for a couple of days while I check on my mother? She’s ill.” Josiah reluctantly says yes, not because she doesn’t want to take care of the animal, but because she knows Sandy’s mother couldn’t possibly be ill. Her mother is, in fact, dead. Josiah attended the woman’s funeral.
Why is Sandy lying? Is she in distress and needs help? Josiah can’t possibly know that in four hours, Sandy will disappear from the face of the earth, and no one, not even Josiah, will be able to find her.

Death By Drama
Josiah joins an amateur thespian group performing plays in public parks and crumbling mansions. It is a way to socialize, and Josiah is lonely when her boyfriend Hunter stops calling. Since the new play is being staged at Hunter’s ancestral home Wickliffe Manor, Josiah sees this as a win-win. She has some fun and reminds Hunter she is still alive and kicking.
What could go wrong? Everything!
Leading lady Madison Smythe, drops dead on Hunter’s Persian rug. What’s worse Franklin, Hunter’s brother, is arrested for her murder!
Josiah sends an S.O.S. to her daughter Asa to help investigate. Asa must also discover why a love note from Hunter is found in the dead woman’s coat pocket. Josiah is ready for romance, but she doesn’t want to fall in love with a cheater, and maybe a murderer.

Death By Stalking
Josiah, Baby, her mastiff, and Lady Elsmere rush to help their neighbor, Rosie, who’s being harassed by Gage Cagle, a mean, old stump of a man.
Lady Elsmere gets Gage thrown in jail for extorting money from Rosie. Glad to be rid of this loathsome man, Lady Elsmere, Josiah, and Rosie attend the Bluegrass Antique Ball. Gage shows up and threatens Josiah, Rosie, and even Baby.
Dismissing Gage as nothing more than a fussbucket, Josiah enjoys the ball until she finds Rosie covered in blood, beside Gage’s near lifeless body. “I didn’t do this,” Rosie swears before fleeing. As Josiah tries to stop the bleeding, she wonders, if Rosie didn’t assault Gage, then who did? 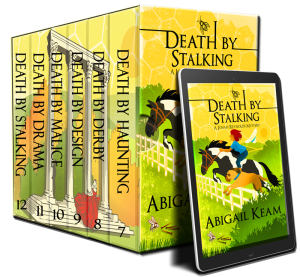