“Interesting twists will keep readers guessing. If you’re looking for a fun mystery, this is for you!” -READERS’ FAVORITE

Murder Under A Blue Moon
Mona Moon is not your typical young lady. She is a cartographer by trade, explorer by nature, and adventurer by heart.But there’s a problem. Miss Mona is broke. It’s during the Depression, and her application has just been turned down to join an expedition to the Amazon. What’s she to do? Perhaps get a job as a department store salesgirl. Anything to tide her over until the next assignment. There’s a knock on the door. Who could this be in the middle of the night?

Holding a revolver, Mona reluctantly opens her door to a man wearing a Homburg hat and holding a briefcase. “I bring glad tidings. Your Uncle Manfred Moon has died and left you as his heir to the Moon fortune. You are now one of the richest women in the country!” he says. Mona’s response is to point her revolver in his face. If the stranger is telling the truth, she will apologize. If he is a fraud, she will shoot him.

Murder Under A Blood Moon
Mona is eating breakfast when she receives a telegram from her friend, Lady Alice Morrell, begging her to come to England. It seems Lady Alice is receiving death threats! Alarmed that her dear friend needs help, Mona gathers her pistol, her steamer trunks, and Violet, her maid, to travel to Merry Old England. Once there, Mona encounters a nemesis she hasn’t seen for a very long time. She was lucky once to survive. Will she be as lucky now? Armed with her pistol, courage, and a bag of tricks, Mona is determined to save Lady Alice from harm.

Murder Under A Bad Moon
Mona has inherited a fortune from her uncle and is one of the richest women during the Depression. But there’s a problem. Miss Mona is being accused of murdering her neighbor by a corrupt sheriff. Mona has made enemies in the Bluegrass, and the sheriff’s been told to make life difficult for her. Mona is considered a radical and dangerous to the other horse owners. It’s too bad someone murdered Judge Landis Garrett, but if the evidence swings around Mona’s way––all the better if it sticks many of the locals think. Mona’s response is to tell the sheriff and his cronies to go to hell. You want a fight? Well, bring it on!

Murder Under A Silver Moon
Mona has inherited a fortune from her uncle and is one of the richest women during the Depression. But there’s a problem. Miss Mona is bored. So she underwrites an expedition to find lost Native American silver mines in Eastern Kentucky. As a condition of underwriting the search, Mona gets to tag along, but soon discovers the expedition has a nefarious purpose. Mona finds herself lost in the Appalachian Mountains with only her wits to save her, but like the panthers roaming the mountain ridges, she is swift, silent, and deadly.

Murder Under A Wolf Moon
Mona attends an elegant party given by Elspeth Hopper, the daughter of a world-renowned archeologist of Egyptian Queen Ahsetsedek IV’s tomb. Not long afterwards, Elspeth’s maid is found murdered, and the local sheriff considers Mona a suspect. That doesn’t sit well with Mona. She’s determined to clear her name and find out who killed the maid and why. When she discovers the low-down varmint, she’ll take care of him her way! She doesn’t carry a gun in her purse for nothing.

Murder Under A Black Moon
Mona attends the Kentucky Derby with Lord Farley and his guest, the fabulous Alice Roosevelt Longworth, one of the most famous women in the world. To their surprise, a man is murdered right under their noses. How could they not have noticed? Mona’s friend, Willie Deatherage, is accused of the murder. Mona is not going to let her friend go to jail for something she didn’t do. If Mona has to interview every one of the 60,000 people attending the Derby, she will. 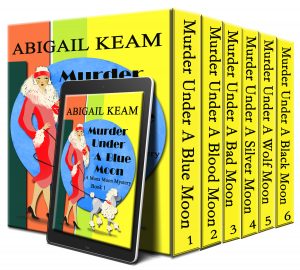